Digitalization and Innovation Were Overarching Topics of User Conference 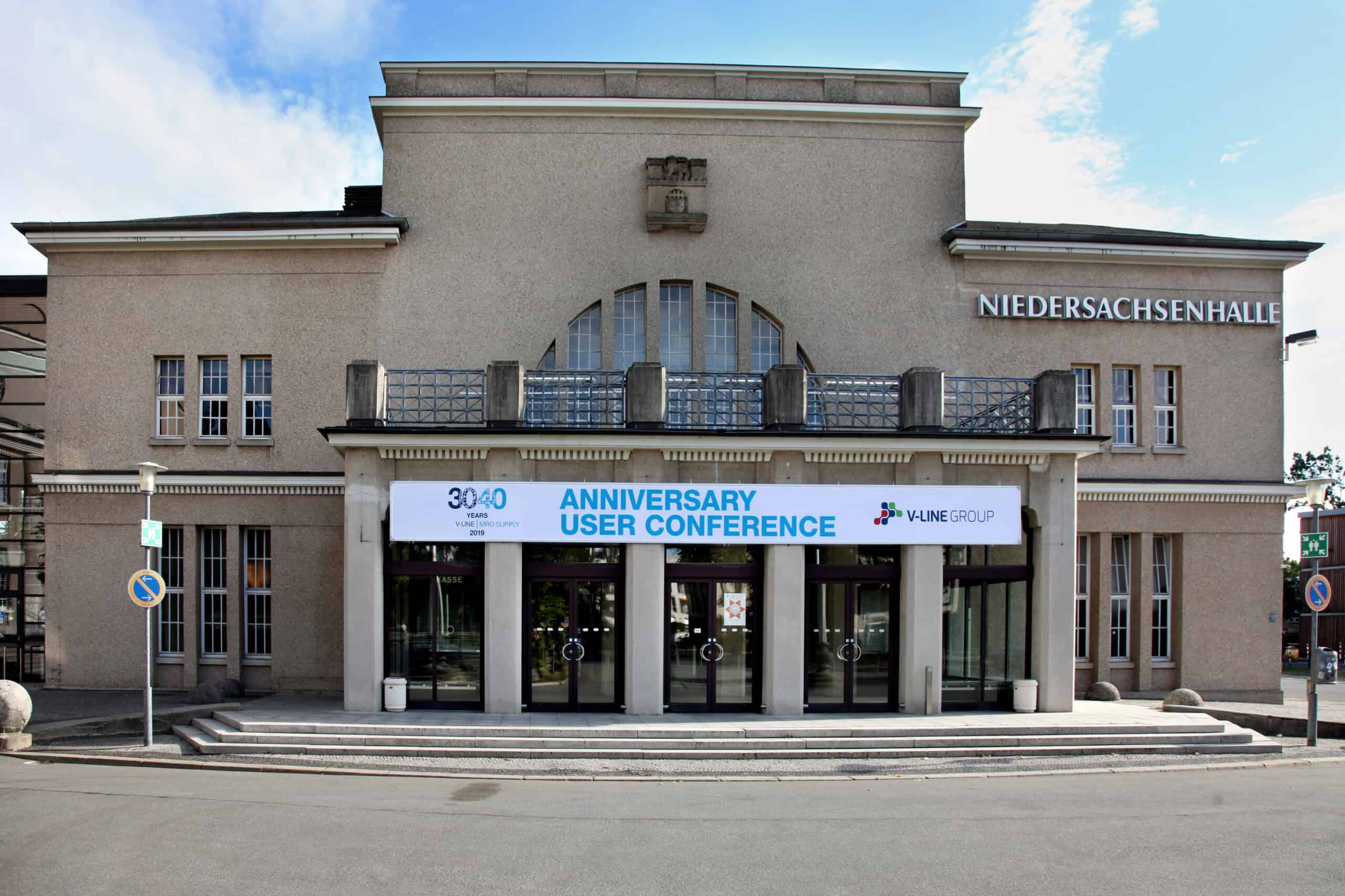 Keynotes, Workshops and Panels were held on the occasion of V-LINE’s 30/40 anniversary

“The future won’t wait. It starts today”: This quote of Detlef Daues, CEO of V-LINE EUROPE GmbH, best describes the spirit of the User Conference which happened on September 4-6, 2019, to celebrate the 30/40 anniversary of V-LINE. “30 years V-LINE, 40 years’ experience in MRO supply – we took this as a chance to look forward into the future. We use the expertise we gathered throughout the years to now shape, create and manage all matters coming up in the future”, Daues stated. This made itself clear in the program of the User Conference: Spare Parts Inventory Planning and Optimization, Vested Outsourcing and Digital MRO Supply Chain Orchestration were some of the topics the participants concentrated on during the 3 days. The group was very mixed and diverse: Next to team leaders, management and executives from German V-LINE headquarters, also delegations of the front offices and subsidiaries in Saudi Arabia, USA, Mexico, Korea and China were on-site. Anyhow, this was not even it: Some of V-LINE’s biggest customers came specially from Saudi Arabia to the conference to jointly discuss current and future topics in the field of MRO. Due to the different perspectives, the exchange was very fruitful.

Before the official beginning at September 4 in the afternoon, customers and internals already gathered at V-LINE headquarters to jointly start the User Conference. During “Exchange and Insights: V-LINE for Customers”, COO of V-LINE EUROPE Klaus Menzel and Shahzad Haider, CEO of V-LINE MIDDLE EAST, welcomed the guests and showed them processes, optimizations and the main buildings. After having transferred to the event location and having lunch together, the second part of Eduard Kopilevich, Head of Group Business Development at V-LINE, dealt with “Business Development at V-LINE GROUP and growing with our customers”. With this mindset, all participants were prepared to deep dive into the topics of the MRO field the key note speakers prepared.

The starting session opened the conference sensationally: 3 key note speakers gathered to give a joint session on the wide field of MRO spare parts inventory planning. Phillip Slater, expert in MRO spare parts optimization, VP of Marketing and BD at SMART Software Jeff Scott and Turgay Temur, Business Development Manager at V-LINE, united to give a visionary session on how the MRO supply field will change in the future. Phillip Slater started with his keynote on “Inventory Optimization” and talked about the past, present and future. He especially pointed that clear metrics and classifications need to be defined to have exact data. Jeff Scott took this further in his keynote “Spares Inventory Optimization and Planning” and presented a software that allows to plan, forecast and optimize spare parts demand based on data – something that hasn’t been used much yet. Turgay Temur then finished with the vision of “Digital MRO Supply Chain Orchestration” which is only based on data and thus needs all steps to be taken first, so this vision can be developed upon it. The session concluded with a panel discussion on the future in spare parts and the MRO field, led by Temur. Experts were the speakers, but also Mr. Daues and some of the customers shared their views and the audience discussed and asked frequently.

Thursday, the second day of V-LINE’s User Conference, began with Kate Vitasek who talked about business relationships in her keynote “Vested Outsourcing: What’s in it for We?” in the morning. Vitasek is educator at University of Tennessee where she did research in this field, upon which her vested outsourcing model is based. In her keynote, she pointed different business relationships – gorilla, ping pong and collaboration: Gorilla being the business man using his power, ping pong meaning both are using their power and are dependent on one another and collaboration bringing out the utmost with both parties working in one direction and supporting each other. This “Win/Win” situation, or the “What’s in it for We?-relationship”, can be achieved by following 5 rules: outcome based working, focusing on the what, clear and measurable outcomes, pricing model with incentives and an insight governance structure. To work on this, the second part of the session was a barrier busting exercise in groups in which every group needed to define the personal barrier, based on the role they received. As second step, the groups were working on one thing they could do to overcome the barrier; thus, they could take a first step and approach with them to head the direction of such a win-win-relationship.

After a short lunch break, all of the Sehnde employees joined the group to have a (Un)Conference together. What’s special about it: The topics are only developed right on that day and then discussed with all interested employees. To start, Christian Bredlow, founder of DigitalMindset and guide through digital transformation, gave a short warm-up and explained the format. The group was then divided: Employees stayed and customers had a parallel session with Bastian Brunotte who is also guide at DigitalMindset, talking about digitalization at their companies. Meanwhile, the employees thought about possible topics they would like to discuss and gathered a total of 12 different topics reaching from public image to environment to internal structure. Afterwards, everybody could decide which topic he would discuss in the two rounds offered. The groups noted down their results and finally presented them in front of all employees in the wrap-up, so everybody had insights into the discussed topics. All in all, it was a motivated, yet relaxed atmosphere in which every employee participated. This also showed itself in the get together afterwards where drinks and a small barbeque were served and everybody could speak about their experiences and impressions of the day. Also customers joined again, so there were multiple possibilities to exchange in a casual surrounding.

The last session of the User Conference started on Friday morning. Gary Cohen, managing partner and co-founder of CO2 Partners and executive coach, took the participants consisting of international V-LINE management on the road how to become better leaders. The day started with a small wrap-up of the findings of the (Un)Conference the day before with Christian Bredlow, as the leaders need to accompany and support the changes resulting from the discussions. Gary then took over and spoke interactively about different models, challenges and how they assess certain situations. Through a live polling software, the whole group was able to answer and see the results directly. The second part consisted of group work: Every group concentrated on one topic influencing culture and the company which was based on a questionnaire everyone had to fill out in preparation: purpose, people, culture, execution, system thinking and strategic thinking. All findings were then presented and the whole conference was closed with a joint lunch, so everyone could prepare for the big anniversary celebration in the evening. 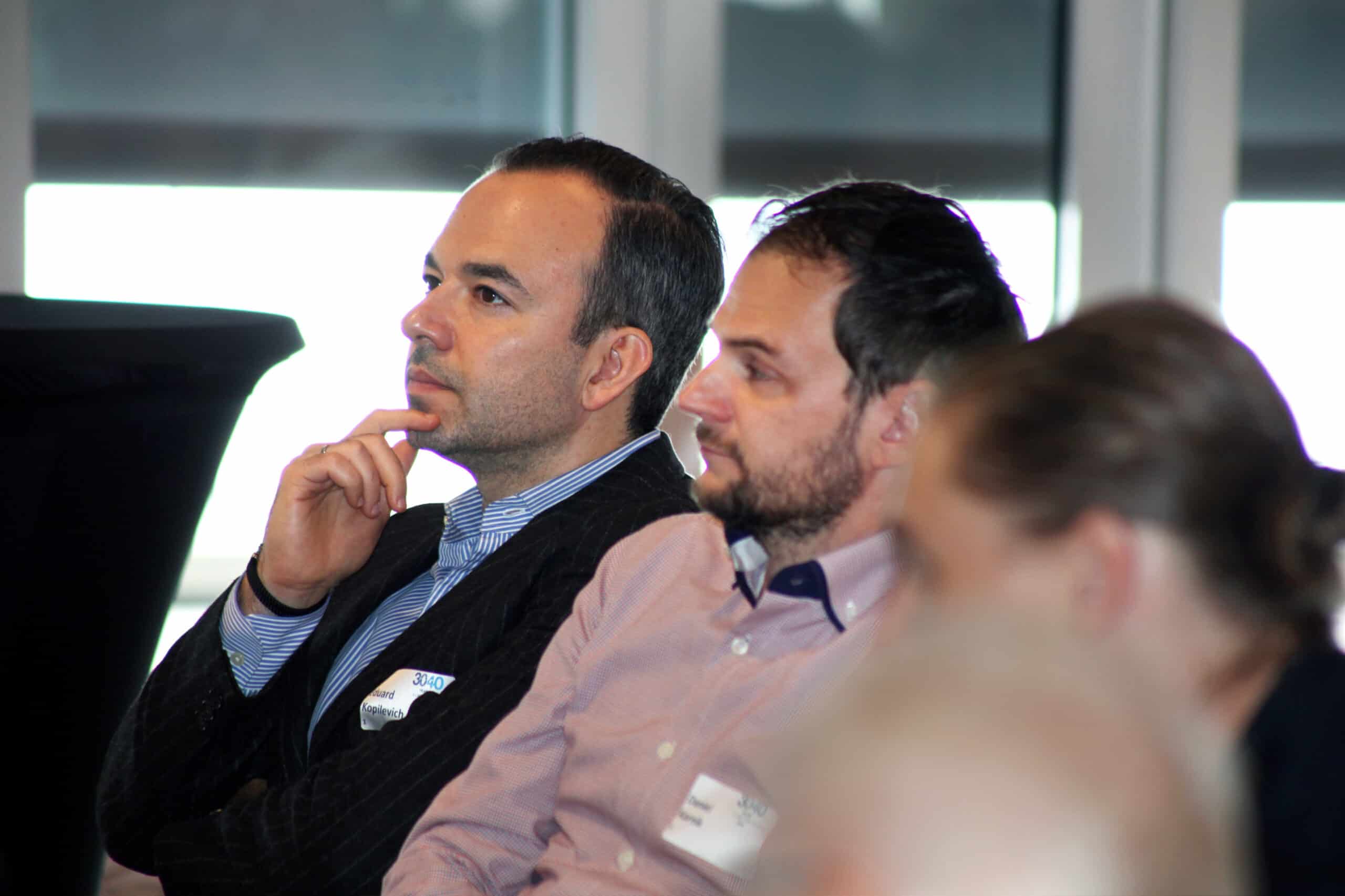 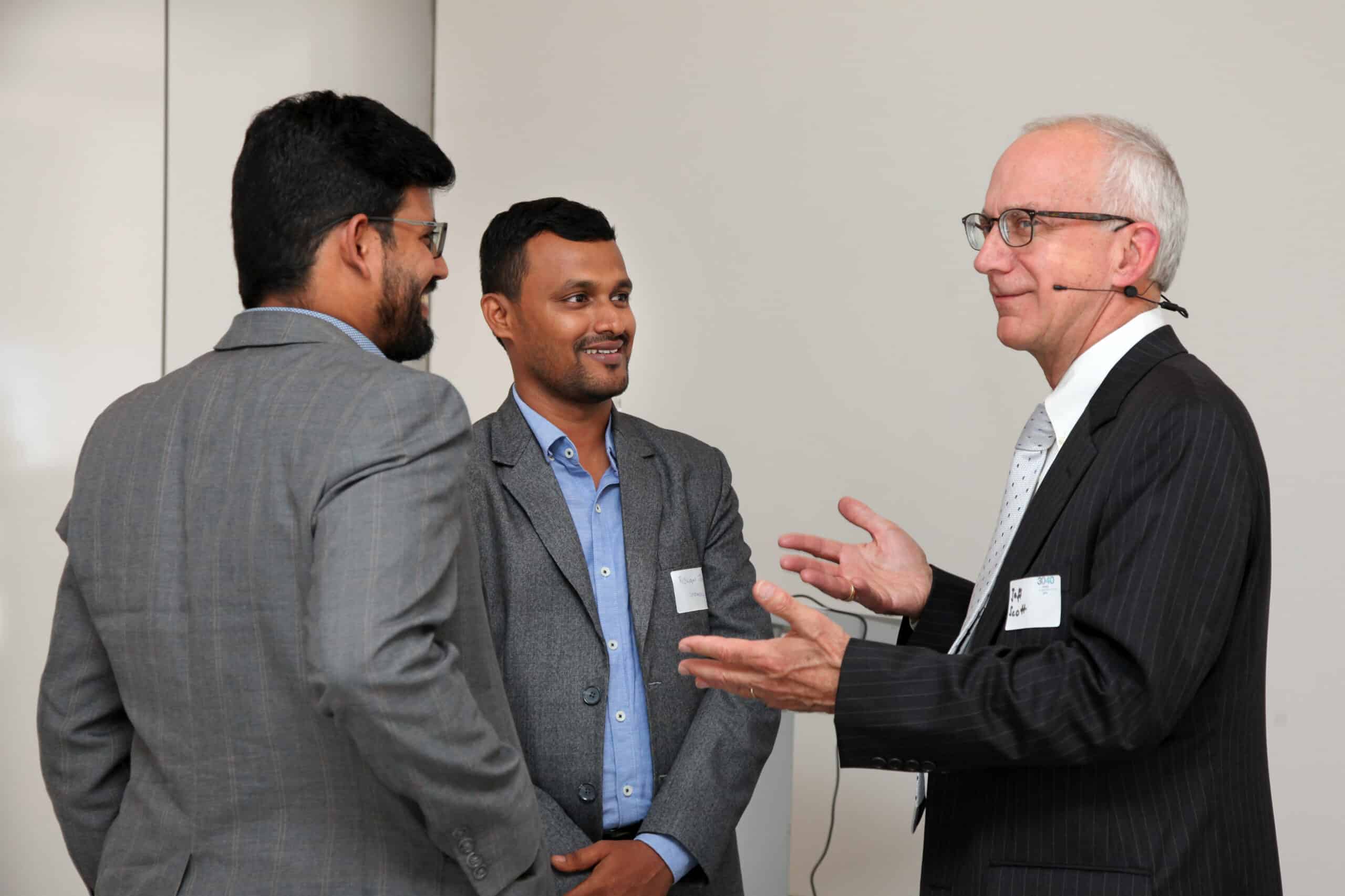 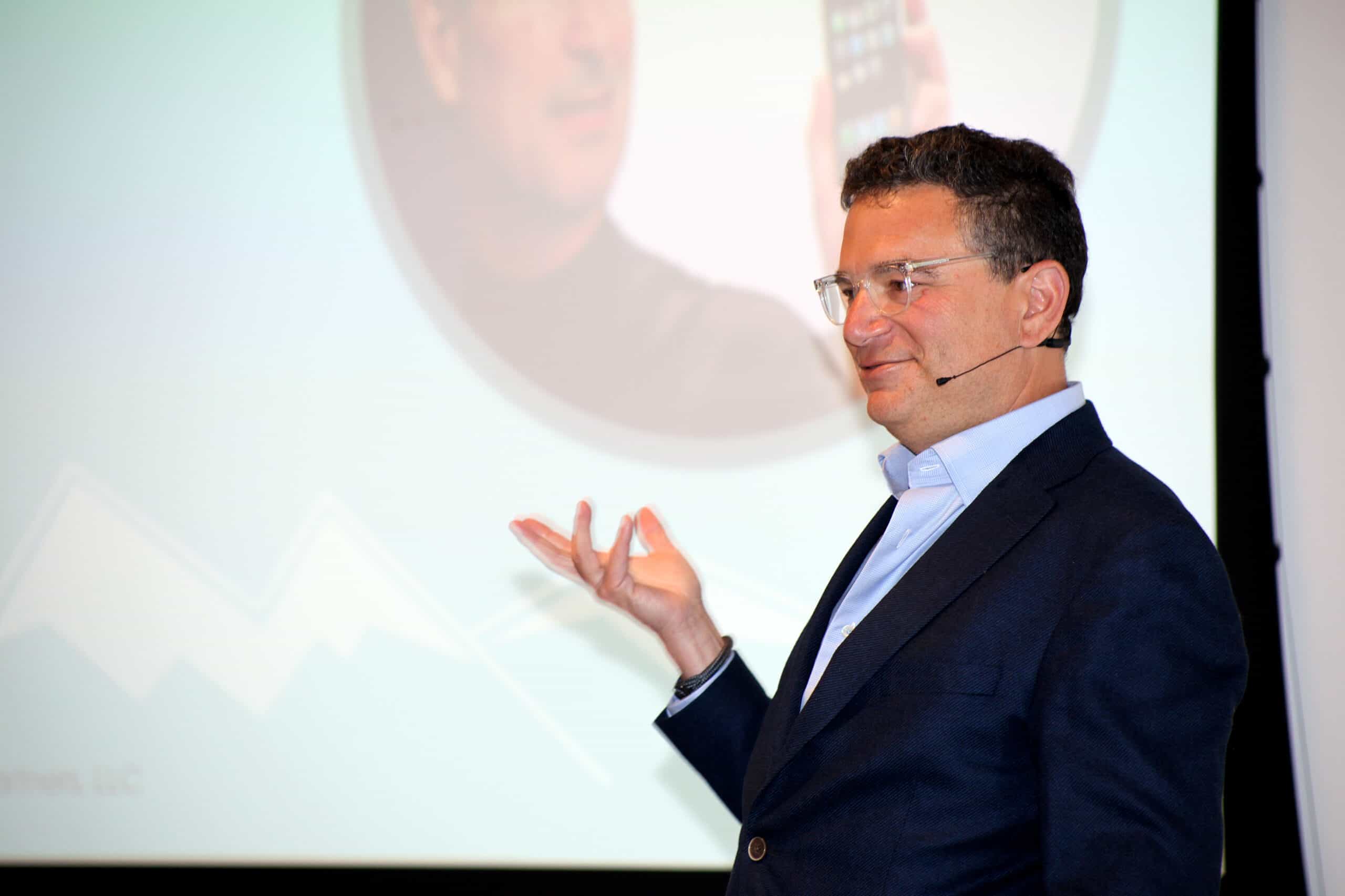