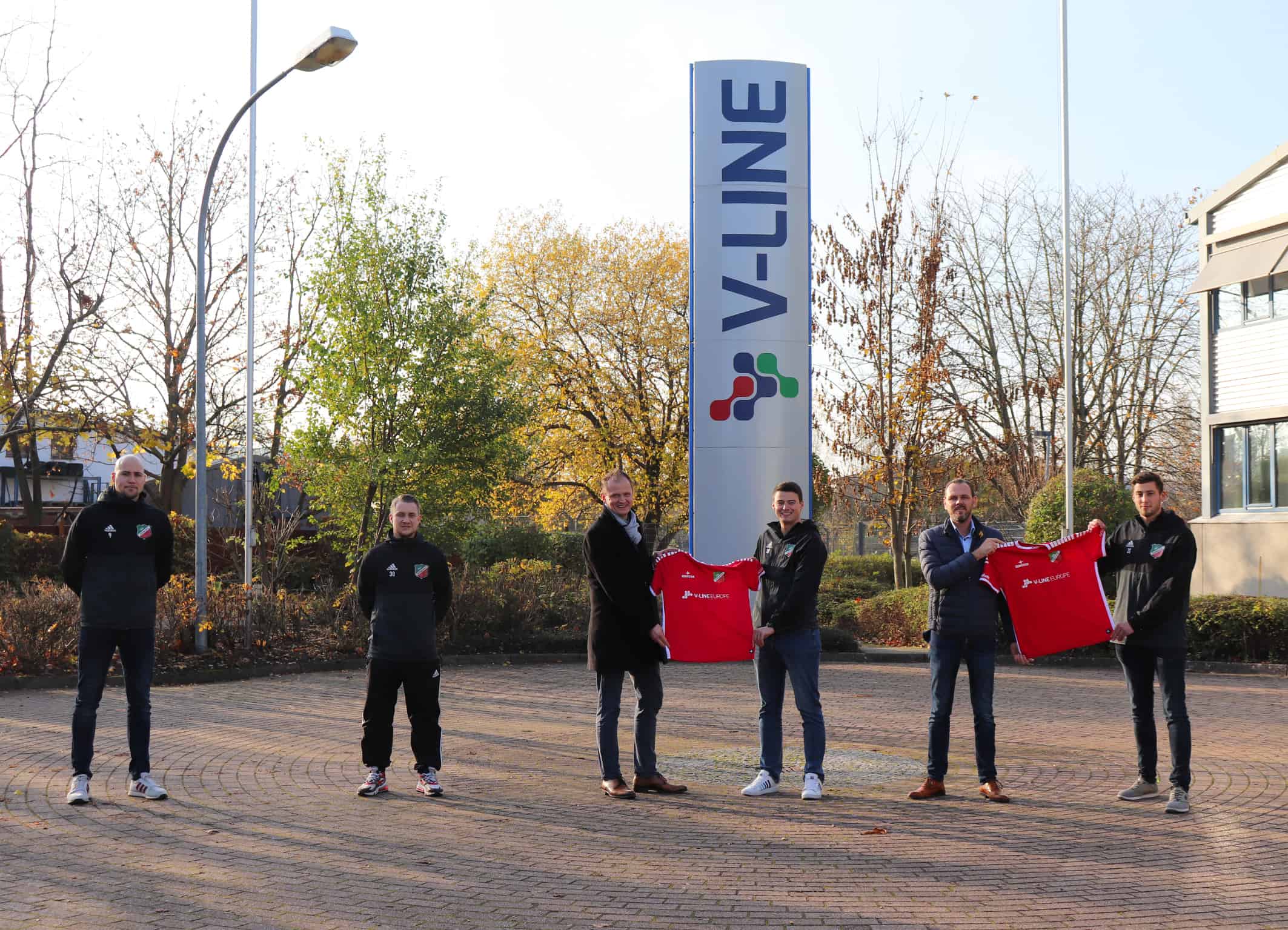 With the handover of a jersey from TSV Germania Haimar-Dolgen to V-LINE EUROPE, the partnership between the district league club and the world’s leading service provider for MRO spare parts procurement officially started.

With the handover of a jersey from TSV Germania Haimar-Dolgen to V-LINE EUROPE last Friday, the partnership between the district league club and the world’s leading service provider for MRO spare parts procurement officially started. The handover took place at the company’s headquarters in Sehnde. The support of the jerseys for the first men’s team is the main component of the partnership, but there are others. “With a donation for the jerseys, our idea started to create something together. We thought about the fact that there are certainly other points where we can help each other, such as strengthening awareness and the desire for regional cooperation and support,” explains Niklas Rosocha, team leader logistics at V-LINE EUROPE as well as vice division manager at TSV Germania. He is the initiator of the idea. Tilman Mieseler, CEO of V-LINE EUROPE GmbH, also sees it that way: “Having a regional network is very important for us as a locally based company. We have been headquartered in Sehnde for 37 years and are therefore committed to local and regional activities. We are very happy about this partnership.” Mieseler is not only referring to a wide variety of donations to local institutions, but also to loyalty to the location and its expansion. In the 37 years, the original warehouse has been expanded by a second larger hall as well as the office building. Constant investments continue to be made in the site and its employees, for example through ergonomic workstations or the reduction of walking distances in the warehouse through a new conveyor belt. “We are currently like many others mainly in mobile work. But knowing that such pleasant working conditions are waiting for you is still nice. It’s a good addition to our standards like fresh fruit and state-of-the-art coffee machines,” says Arne Hartmann, Director of Global HR at V-LINE EUROPE. “We also support our employees outside of work with leisure activities such as bike leasing or sports.” The TSV Germania Haimar-Dolgen club is just as firmly rooted in the region. Founded in 1976, it was already a state league player and thrives on the great commitment of its volunteer club members. The soccer division with 8 teams is the largest of the club. The first men’s team itself has been playing together for years and has experienced an upswing, especially in the last two years. “Before the 2020 season was cancelled, we were second in the district league. This is mainly thanks to our new coaching team,” said Rosocha. Even outside of pure soccer, the team is united by a very good team spirit through joint actions. It also successfully operates an Instagram channel among other things, a fact that V-LINE EUROPE also found interesting. “Entering into a cooperation on social media and especially on Instagram with our apprentices channel was the icing on the cake of this partnership for us,” explains Hartmann. “As a major employer in the region with over 150 employees at the site, and over 250 worldwide, we are also a training company and take on 2-4 new apprentices every year. The Corona crisis has not changed that.” The proposal for a partnership was therefore received enthusiastically by both sides. For the future, the company and the club are already thinking about further joint activities, such as a friendly match between the first men’s team and a V-LINE team.